Small reactors can supply reliable power in island countries, says Rosatom
Russia’s state nuclear corporation Rosatom and the Philippines Department of Energy have agreed on an action plan to explore the potential of deploying small modular reactors supplied by Russia in the southeast Asian nation.

Rosatom said the action plan involves a pre-feasibility study and follows a memorandum of intent signed between Moscow and Manila in 2019.

The Philippines is an archipelago nation of more than 7,000 islands, many without reliable access to electricity. Nuclear energy is seen by proponents as a potential answer to the Philippines’ twin problems of precarious supply and Southeast Asia’s highest electricity costs.

In December 2021, Philippine power utility Manila Electric Company (Meralco) said it was open to considering the deployment of SMRs as part of its long-term energy investment strategy.

The Manila Bulletin quoted the privately owned company’s president and chief executive officer Ray Espinosa as telling reporters that nuclear is “something worth looking into but I don’t think we can get nuclear power generation plants up and running earlier than 10 years from now”.

Mr Espinosa said nuclear, especially advanced small modular reactors would be a good source of generation because they fit the archipelagic nature of the Philippines.

He said it will be SMRs – which generally have capacity of 300 MW or less – that can be best installed primarily in off-grid areas, given the archipelagic frame of the country’s energy market.

Rosatom said its SMRs are “a reference solution” tested in the harsh conditions of the Arctic on icebreakers. Russia has led the way with commercial floating reactor technology. The Akademik Lomonosov, the country’s first floating nuclear plant, is docked at Pevek and supplying energy for the remote Arctic port town. Moscow is also developing its icebreaker reactor technology for land-based SMRs for deployment to isolated mines and communities.

The Philippines has a nuclear station at Bataan, north of the capital Manila, but it has never operated and has been mothballed.

Construction of the single Westinghouse pressurised water reactor unit, the only nuclear energy facility in Southeast Asia, began in the late 1970s under former president Ferdinand Marcos’ regime. Work was stopped due to issues regarding corruption and safety, compounded by concerns following the Chernobyl disaster in 1986. 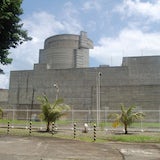 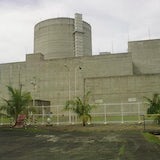