14 May (NucNet): Japan has made good progress in improving its decommissioning strategy at Fukushima-Daiichi, but a range of challenging issues remain and the situation onsite remains “very complex”, a report published today by the International Atomic Energy Agency says.

The report, based on findings made during a February 2015 visit to Tokyo and the Fukushima-Daiichi site by a 15-member IAEA team, says those challenges include persistent underground water ingress to main buildings and the accumulation of contaminated water onsite; the long-term management of radioactive waste; and problems related to the removal of nuclear fuel, damaged fuel and fuel debris.

The report says the creation in 2014 of a new branch of Tokyo Electric Power Company (Tepco), called Fukushima-Daiichi Decontamination and Decommissioning Engineering Company, as the only responsible organisation for the safe implementation of the onsite radioactive waste management and decommissioning activities, is “a good step forward to clarify responsibilities”.

It says the situation onsite has improved since the last IAEA mission in 2013. Several important tasks have been accomplished such as the completion of the removal of fuel from Unit 4; the improvement and expansion of contaminated water treatment systems; the installation of new tanks and associated systems for contaminated water storage; the operation of underground water by-pass; and the clean-up of the site resulting in a reduction in radiological dose rate.

But the report says the safe decommissioning of Fukushima-Daiichi remains “a very challenging task” that requires the allocation of “enormous resources”, as well as the development and use of “innovative technologies to deal with the most difficult activities”.

“The change of emphasis involved in a transition from operating a nuclear power plant to that of radioactive waste management and decommissioning is profound,” the report says. “It is, therefore, to be expected that the situation at the site remains very complex (despite significant progress).”

The report acknowledges that the Japanese government and Tepco had taken into account advice provided following earlier IAEA missions to improve planning and decommissioning. The report contains advisory points on topics such as long-term radioactive waste management, measures against contaminated water and issues related to the removal of spent nuclear fuel and fuel debris.

The report is online: http://bit.ly/1JgzABl 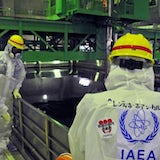