“The commissioning of the NSC is planned for December... The works on installation of equipment and systems are being completed,” Mr Poroshenko said during a visit to the Chernobyl site yesterday to mark the 32nd anniversary of the 26 April 1986 disaster.

The €1.5bn NSC – the largest moveable land-based structure ever built – was slid into place from its construction site in November 2016, marking a milestone in the programme to transform Chernobyl into an environmentally safe and secure state.

Completion of the NSC in 2016 meant the radioactive remains of the power plant’s destroyed reactor number four were safely enclosed following one of the world’s most ambitious engineering projects.

Equipment in the NSC must be connected to the new technological building, which will serve as a control room for future operations inside the arch. Intensive testing needs to be carried out of all equipment.

In 2016 the European Bank for Reconstruction and Development, which manages the Chernobyl Shelter Fund and is the largest contributor to the NSC project, said the handover of the NSC to the Chernobyl Nuclear Power Plant administration was expected in November 2017. No reason has been given for the delay.

The EBRD said the NSC will make the accident site safe and with a lifetime of 100 years allow for the eventual dismantling of the ageing makeshift shelter from 1986 and the management of the radioactive waste.

Mr Prishenko also said hot tests will begin before the end of the year on the new spent nuclear fuel storage facility known as ISF-2. “I just checked the state of readiness and was told it is 98%,” Mr Poroshenko said. 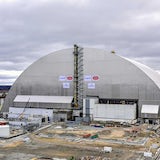