The company said in a statement that the Westinghouse unit, construction of which began in April 2009, went commercial at 03:57 local time today after completing a final test run of 168 hours.

In June 2018, Sanmen-1 became the first AP1000 to attain a chain reaction. The unit was connected to the grid on 30 June 2018 and began generating electricity.

CNNC said the plant is capable of generating 1,117 MW of electricity when at full power.

Sanmen-1 is the first of a fleet of four new AP1000 plants in eastern China – two at Sanmen and two at Haiyang – and will provide energy for the next 60-plus years, the company said. Sanmen 1’s sister unit, Sanmen-2, was connected to the grid in August. Also in August, Haiyang-1 was connected to the grid and fuel loading was completed at Haiyang-2.

There are also two AP1000s under construction at the Vogtle site the US.

The Post said Sanmen-1 missed its original 2013 start-up target due to design problems and supply chain bottlenecks. China Energy News reported in August, citing a State Nuclear Power Technology Corporation official, that the unit is 10 billion yuan ($1.46bn) over its original 40-billion-yuan budget, as is a similar reactor being built in Haiyang.

Shanghai-based research company Nicobar told NucNet last month that China is officially aiming for 58 GW of installed nuclear capacity by 2020 – up from almost 36 GW today – but the country’s nuclear sector faces a number of challenges and this target is likely to be missed.

Nicobar said the 58 GW will probably be reached in 2021 or 2022. Looking further ahead, China’s goal is to have 110 nuclear units in commercial operation by 2030, but this target is likely to be adjusted in the next Five-Year Plan, the first draft of which will appear in 2019.

According to the International Atomic Energy Agency, China has 44 nuclear reactors in commercial operation and 13 under construction.

According to Westinghouse, the AP1000 is a two-loop pressurised water reactor that uses a “simplified, innovative and effective” approach to safety. Plant simplifications have resulted in fewer components, cable and seismic building volume, all of which contribute to considerable savings in capital investment, and lower operation and maintenance costs, the company said. At the same time, the safety margins for the AP1000 plant have been “increased dramatically over currently operating plants”. 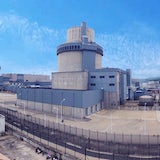