Russia supplying two reactors for Liaoning province site
The pouring of first concrete has begun for the Xudabao-3 nuclear power plant being built with Russian technology in Liaoning province in northeast China, China National Nuclear Corporation said in a note to the Shanghai stock exchange.

Xudabao-3 will be a conventional pressurised water reactor unit using Russian-made VVER-1200 technology. There are also plans for a fourth unit at the site.

In May, Chinese president Xi Jinping and his Russian counterpart Vladimir Putin watched the launch ceremony by video link of a nuclear energy project to build four new Russia-supplied reactors in China.

State-run China Global Television Network said the groundbreaking ceremony in May marked the start of “the largest-ever joint nuclear energy project between the two countries” and “it’s considered a major step forward in relations between Beijing and Moscow”.

In China’s latest five-year plan – which set out China’s economic and development goals for the five years from 2021 – Beijing said it aims to have 70 GW of installed nuclear capacity by 2025 from about 50 GW at the end of 2019. That would equate to about 20 new reactors, 2021-2025, although China already has 12 under construction.

China failed to meet its nuclear energy targets under the previous five-year plan covering 2016 to 2020. It had suspended approvals for new nuclear power stations in 2011 after the Fukushima-Daiichi nuclear disaster in Japan.

China has 51 nuclear reactors in commercial operation, the third highest number behind the US (93) and France (56). In 2019, nuclear energy accounted for 4.9% of the country’s electricity production share, according to the International Atomic Energy Agency.

CNNC said in April that construction had begun of two indigenous Hualong One nuclear power plants at Changjiang. 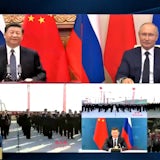 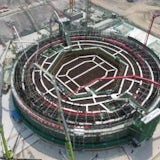 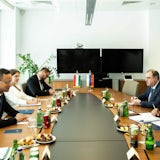