Plans for Chyhyryn were shelved in 1989 following the Chernobyl disaster
Ukraine is looking at new sites where it can build commercial nuclear power plants once the war with Russia is over, with the “most promising” location in the east of the country where a new unit was under construction during the Soviet era.

Plans to build the Chyhyryn nuclear power station, in Cherkasy Oblast, central Ukraine, were shelved in 1989 following the 1986 Chernobyl accident. Ground had been broken in 1970, but little progress made.

“There was a plot allocated for this and there are good conditions, the population is positive about the construction of such a facility,” he said. “It is the centre of Ukraine, there is a high-power transmission line nearby, and a lot of water, which is important for a high-capacity nuclear power unit.”

Mr Kotin said last year that Energoatom was working to get the Chyhyryn site approved.

Mr Kotin said the town of Orbita was built for the planned nuclear facility but abandoned. “We will rebuild it,” Mr Kotin said, adding “it will be a garden city”. Construction at Orbita was officially cancelled before fall of the Soviet Union, but it nevertheless has a population of 120.

According to Agence France Presse, plans for the town were initially drafted in 1970, the year ground was broken for the nearby nuclear station.

In the same interview with Vesti, Mr Kotin said construction work on two new Westinghouse AP1000 units at the Khmelnitski nuclear power station “will begin as soon as the war is over”.

He said an agreement signed with Westinghouse covered the construction of five units in total, with the other three units to be distributed at the country’s other existing nuclear power sites.

The agreement includes two new Westinghouse-made AP1000 nuclear reactor units by 2029 at the existing Khmelnitski site. The move means the uncompleted Unit 4 will be completed and a new Unit 5 will be built using AP1000 technology. 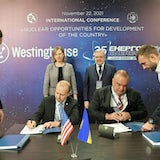 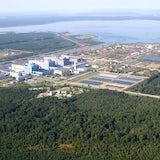 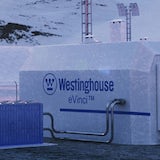