10 Apr (NucNet): Commercial operation of the Olkiluoto-3 nuclear power plant in southwest Finland could be delayed by a further two months after utility Teollisuuden Voima Oyj announced today that the plant supplier is reviewing the schedule.

TVO said in a statement today that the Areva-Siemens consortium will provide the new schedule in June.

The company said work during the first quarter of the year at Olkiluoto-3 has not been progressing according to a schedule provided by Areva-Siemens in November 2018.

Nuclear fuel was to be loaded into the reactor in June 2019, but that will not now happen before the end of August, TVO said.

First connection to the grid was planned for October 2019 and the start of regular electricity production was scheduled for January 2020.

Construction of Olkiluoto-3, a 1,600-MW EPR unit, began in August 2005 and is about nine years behind schedule. Last month the Finnish government granted an operating licence for the unit.

In March 2018 TVO signed an agreement with Areva-Siemens over costs and losses caused by delays to the project. The settlement included compensation of €450m to be paid in two instalments. 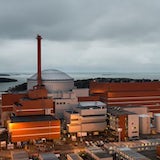