The No.1 reactor at the plant, also known as at Shidaowan, achieved first criticality at 09.35 local time on 12 September, CNNC announced. It said the milestone was reached 23 days after the start of fuel loading.

Operators will now perform zero-power physical tests to verify the core and control rod performance and the functionality of monitoring equipment.

The unit is scheduled to be connected to the electricity grid before the end of this year and to begin generating electricity for the grid in 2022.

Its fuel is in the form of thousands of six-centimetre graphite pebbles containing uranium enriched to 8.9% uranium-235. Instead of cooling water, the reactor’s graphite core is bathed in inert helium gas with an outlet temperature of up to 750°C.

China Huaneng, the lead organisation in the consortium to build the HTR-PM with a 47.5% stake, said the plant is suitable for small and medium-sized power grids and has a range of potential commercial applications, including power generation, cogeneration of heat and power, and high-temperature process heat applications.

Other consortium members are China National Nuclear Corporation subsidiary China Nuclear Engineering Corporation (32.5%) and Tsinghua University's Institute of Nuclear and New Energy Technology (20%), which is the research and development leader.

Work on the HTGR began in December 2012 and it had had been expected to start generation in 2019, which would have made it the first Generation IV reactor to enter operation. No reason has been given for the delay. 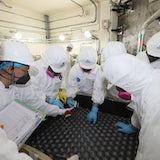 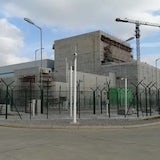 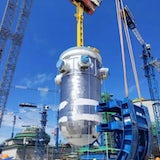