After meetings in Turkey, Rafael Grossi says situation is ‘very dire and we need to move fast’
Safeguards communications equipment at the Chernobyl and Zaporizhzhya nuclear sites in Ukraine remains compromised, which means there is “a growing issue” related to where nuclear material is and what is happening to it, the head of the International Atomic Energy Agency said.

Speaking at a press conference on his return from what he called an “intensive day” of meetings with the foreign ministers of Ukraine and Russia in Antalya, Turkey, Rafael Grossi said “what we have is a degrading situation which is a concerning situation for us”.

He said the IAEA is not losing all information regarding nuclear material, but is losing a significant amount. “Safeguards is predicated on the basis of a constant monitoring capacity,” he said.

Mr Grossi confirmed that as of Thursday evening, there was still no contact with safeguards information from Chernobyl and Zaporizhzhya.

He said he could not confirm reports that Belarusian technicians have restored electricity to Chernobyl. He said communications with Chernobyl have been “a bit shaky” with interruptions and restorations at different times of the day.

Asked if Russia was responsible for the lack of safeguards information from Chernobyl and Zaporizhzhya, Mr Grossi said it is impossible to say what is behind any particular issue at any time of day. “I don’t have the investigating capacity to know this,” he said. “Whenever it happens, we try to re-establish contact as soon as possible, but in some cases it has proven to be not possible.

“The issue here is non-proliferation, being sure we can say that this material – and there is a lot of nuclear material in Ukraine – we have got track of,” Mr Grossi said.

In the press conference, on Thursday evening, Mr Grossi said he was going to be presenting detailed ideas to both sides “in the next few hours”, potentially including the possibility of placing IAEA experts in Ukraine. But he said “first we need an agreed framework and understanding of what it is we are talking about”.

Mr Grossi said he was “quite encouraged” because Ukraine and Russia want to work with the agency. He called the situation “grave”, adding “it’s very dire and we need to move fast”.

Ukraine, Russia and the IAEA are “looking into concrete things we intend to do” and this is “tremendously encouraging, but before we get a result there is a lot to be discussed”. Mr Grossi said there was a high probability of a meeting “very soon”.

He said that because of the dangers and in view of “what we have seen on the ground, what happened last week, and the almost daily episodes we have at one or the other facility in Ukraine”, an agreed framework for safeguards and security is needed.

On 4 March Ukraine confirmed that the six-unit Zaporizhzhya facility in southeast Ukraine had been seized by Russian forces. A fire sparked by overnight shelling burned for several hours. Chernobyl was captured by Russian troops soon after the invasion began in February.

“Something specific is needed if we are to reinforce the safety of the installations in Ukraine,” Mr Grossi said. “This proposal was received with interest, I would say, but also with many questions.

Mr Grossi said his first goal was to establish direct dialogue at a very high level and this was achieved. He said both sides are ready to work and engage with the IAEA.

Ukraine told the IAEA on Thursday that it had lost all communications with Chernobyl, the day after the Russian-controlled site lost all external power supplies.

Earlier in the day, the Ukraine regulatory authority SNRIU told the IAEA that emergency diesel generators were providing electricity to the Chernobyl plant, which has no operational reactors, but does have various radioactive waste management facilities and spent fuel that needs to be cooled. The subsequent loss of communication meant that the regulator could no longer provide updated information about the site to the IAEA.

According to information received before the loss of communication, both of the site’s power lines had been damaged, in effect disconnecting it from the grid. To ensure continued power, these lines would either need to be repaired or the generators holding fuel for two days would require additional diesel deliveries.

The diesel generators were powering systems important for safety, including those for spent nuclear fuel and water control and chemical water treatment, SNRIU said, adding that the operator was not able to maintain some functions such as radiation monitoring, ventilation systems, and normal lighting.

The IAEA said disconnection from the grid will not have a critical impact on essential safety functions at the site because the volume of cooling water in the spent fuel facility is sufficient to maintain heat removal without a supply of electricity.

SNRIU said eight of the country’s 15 reactors remained operating – two at Zaporizhzhya, three at Rovno, one at Khmelnitski and two at South Ukraine. Radiation levels at the four sites were normal, it said. 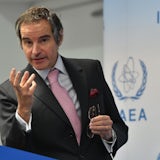 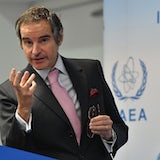