6 Jun (NucNet): Nuclear energy can make a significant contribution to decarbonisation, but the industry must receive “clear and consistent policy support for existing and new capacity” with nuclear also included in clean energy incentive schemes, the International Energy Agency (IEA) says in a report published today. The report, Energy Technology Perspectives 2017, says efforts are needed to reduce the investment risk in new nuclear due to uncertainties such as licensing and siting processes, which have clear requirements and do not require significant capital expenditure before receiving a final approval or decision. “Industry must take all actions possible to reduce construction and financing costs in order to maintain economic competitiveness,” the report says. The report examines how the energy sector can be transformed by clean energy and avoid dangerous levels of climate change. It says nuclear power saw 10 GW of capacity additions in 2016, the highest rate since 1990. Yet doubling of the 2016 annual capacity addition rate to 20 GW annually is needed to meet a target of limiting global warming to two degrees Celsius by 2060 – the “2DS scenario”. This would offset planned retirements and phaseout policies in some countries. According to the report, closures of reactors struggling to compete in markets with depressed wholesale electricity prices are also looming, and 2016 brought only 3 GW of new construction starts, posing risks to the future growth rates of nuclear power generation. The report concludes that the global power sector can reach net-zero CO2 emissions by 2060 under the 2DS scenario. This would require increased deployment of a portfolio of technologies, including 74% of generation from renewables, up from approximately 24%, and 15% from nuclear, up from approximately 11%. Details online: http://bit.ly/2r1d9u3 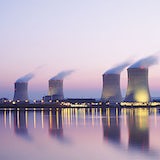