Two new units are under construction at the site
The Kursk-1 nuclear power plant, which was connected to the grid in December 1976 and began full commercial operation in October 1977, has been permanently shut down, Russia’s state nuclear power operator Rosenergoatom said.

Alexander Uvakin, Kursk NPP’s acting director, said that during its operation, the the unit has generated more than 251TWh of electricity – enough to provide for the energy consumption of the Kursk region for about 30 years.

An identical plant, Kursk-2, which began commercial operation in August 1979, is also scheduled to retire.

According to the International Atomic Energy Agency, Russia has 38 nuclear units in commercial operation, although with the closure of Kursk-1 that is now 37. It has four units under construction: Kursk 2-1, Kursk 2-2, Baltic-1 and the Generation IV Brest-OD-300 lead-cooled fast reactor pilot demonstration plant at the site of the Siberian Chemical Combine in Seversk, southwest Siberia. 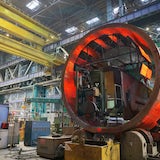 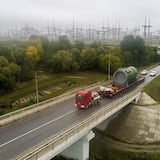