26 Mar (NucNet): Global generation from nuclear energy reached pre-Fukushima levels in 2018, mainly as a result of new additions in China and the restart of four reactors in Japan, the International Energy Agency has said.

In its Global Energy And CO2 Status Report, published on 26 March, the Paris-based agency said nuclear generation increased by 3.3%, or 90 TWh, and nuclear plants worldwide met 9% of a 4% global increase in electricity demand.

Production in Switzerland, Taiwan, Pakistan and Sweden also increased. Generation fell in South Korea, because of new maintenance regulations, and in Belgium, because of shutdowns caused by safety-related concerns.

Global electricity demand rose by 4% in 2018, nearly twice as fast as overall energy demand, and at its fastest pace since 2010, the agency said.

Together, renewables and nuclear power met most of the increase in power demand. However, generation from coal- and gas-fired power plants increased considerably, driving up CO2 emissions from the sector by 2.5%.

China and the US, the world’s two largest power markets, accounted for 70% of global demand growth for electricity. In China, electricity demand increased by 8.5%, a notable increase compared with recent years. This was led by the industrial sector, including iron, steel and other metals, cement and construction, as well as higher demand for cooling.

Energy consumption worldwide grew by 2.3% in 2018, nearly twice the average rate of growth since 2010, driven by a robust global economy and higher heating and cooling needs in some parts of the world.

The biggest gains came from natural gas, which emerged as the fuel of choice last year, accounting for nearly 45% of the increase in total energy demand. Demand for all fuels rose, with fossil fuels meeting nearly 70% of the growth for the second year running.

The Global Energy And CO2 Status Report is online: https://bit.ly/2GS2NWV 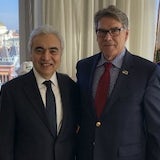