20 Jul (NucNet): Regular electricity production from the new 1,600-megawatt Olkiluoto-3 EPR will start late in 2018, Finnish nuclear power company Teollisuuden Voima Oyj (TVO) said in an interim financial results statement. The utility, releasing first half results, said the schedule had come from the plant supplier, a consortium of Areva and Siemens. TVO said civil construction work on the unit was almost complete. Pipeline installation and welding in the emergency generator building has progressed and work on cabling also continued, it said. Testing of the instrumentation and control systems has progressed and the first phase of the turbine plant commissioning has been completed, TVO said. If Olkiluoto-3 does become operational in 2018, it will be nine years behind schedule. Commercial operation was originally scheduled for April 2009 and subsequently delayed to 2016. 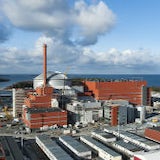