31 May (NucNet): Commercial operation of the Flamanville-3 EPR unit under construction in northern France could be further delayed because of the need for safety checks after flaws were discovered in the weldings of the reactor’s secondary circuit, reports in French media have said.

The unconfirmed reports quoted Thierry Charles, deputy director-general in charge of nuclear safety at the Institute for Radiation Protection and Nuclear Safety (IRSN), as saying operation of Flamanville-3 could be delayed by “at least several months”.

State-controlled utility and nuclear operator EDF said on 10 April that problems with Flamanville’s weldings were worse than first expected and might impact the reactor’s cost and schedule.

The company said at the time that it would comment on the startup schedule at the end of May after it had verified all 150 weldings in the secondary circuit, which conducts steam from the steam generator to the plant’s turbines. EDF has not made any statement in response to today’s reports.

In February EDF said some weldings on Flamanville-3’s secondary cooling circuit did not meet specifications, but said the issue would not affect safety or the schedule to start up the plant at the end of 2018.

EDF said last month the discovery was made during an initial comprehensive inspection of the plant. The inspection was a regulatory requirement before startup. It included the examination of the welds of the primary and secondary systems.

The loading of nuclear fuel at Flamanville-3 was scheduled for the end of the 2018. Construction costs for the project are €10.5bn, EDF said. An estimate of the cost in July 2011 was €8bn. 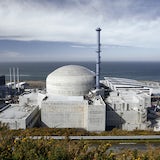