15 Apr (NucNet): Construction of the Generation IV BN-1200 sodium-cooled fast neutron reactor at the Beloyarsk nuclear power station in central Russia has been postponed until at least 2020, with state nuclear operator Rosenergoatom citing the need to improve fuel for the reactor and questioning the project’s economic feasibility.

Rosenergoatom had planned to build two BN-1200 units at Beloyarsk with commercial operation scheduled by 2025. But construction depended on the results of operating the pilot BN-800 plant, which achieved first criticality in June 2014 and has not yet begun commercial operation.

There is one existing, commercially operational sodium-cooled fast reactor at Beloyarsk, the BN-600. Both the BN-600 and the BN-800 are smaller versions of the BN-1200. There are also two permanently shut-down light-water reactors at the site.

According to the Russian Nuclear Community website, Rosenergoatom blamed the postponement on the need to improve fuel for the BN-1200. “At the same time the economic feasibility of launching the project in the current economic conditions has been questioned by the nuclear industry, the power industry and experts,” the website said.

According to reports in Russia earlier this month, capital investments made by Russia’s state nuclear corporation Rosatom in 2015 will be reduced from 300 billion roubles (RUB) (€5.5 bn, $5.9 bn) to RUB 260 billion (€4.8 bn, $5.1 bn) because of the “difficult financial situation”. In particular, investments by Rosenergoatom will decrease from RUB 190 billion to RUB 146 billion.

The Russian government said in November 2013 that if the BN-1200 design was successful, two reactors of this type will be built at a new nuclear station called South Ural, about 200 km southeast of Yekaterinburg. 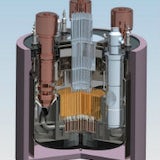