Tass said the decision was taken because under a government-regulated fixed power supply agreement with wholesale consumers, any return on nuclear investment must be at least 10.5%, which would mean electricity prices for the consumers would increase to meet the target.

Fixed power supply agreements have been in place in Russia since 2008 to guarantee returns on investment in generating capacity. The final wholesale prices are usually higher than the prevailing market price to compensate costs incurred by the investor during construction. The agreements include government-regulated price levels for various types of consumer, dependent on their maximum consumption.

Neither Tass nor Rosatom gave details, although Tass said postponing commissioning of the units will lead to a reduction in the rate of electricity price growth in 2019 from 12.9% to 11.1%.

Tass quoted an official from state-owned nuclear operator Rosenergoatom as saying the delays would not lead to an increase in the cost of building the two units, which are in the final stages of construction. Tass said the postponements would allow costs to be spread out, reducing the potential burden on consumers.

According to the International Atomic Energy Agency, Russia has 35 nuclear units in commercial operation and seven under construction.

The IAEA said Russia’s nuclear fleet provides around 17.2% of the country’s electricity, although according to media reports last week president Vladimir Putin said the figure for 2017 was 19%. Russia’s target is to increase this to 25% by 2030. 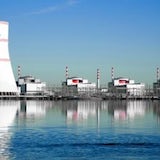