27 Dec (NucNet): Russia’s minimum objective is to maintain the share of nuclear in its energy mix at around 18%, a significant reduction from more optimistic targets set as recently as 2014. Alexander Lokshin, first deputy general-director of state nuclear corporation Rosatom said in an interview on the company’s website that the reason for the reduction in new-build plans is the almost stagnant rate of energy demand in Russia. He said forecasts of around 4.5% annual growth in energy demand set in 2006 “proved to be far from reality”. He said growth in energy consumption is almost at zero while existing nuclear generating capacity that was scheduled to be shut down is continuing to operate. “The result is not only that there is no generating shortage, but that there is an excess.” Russia, which according to the International Atomic Energy Agency has 36 nuclear units in commercial operation and seven under construction, said in 2014 that it planned to put 19 new reactors into commercial operation by 2030 with lifetime extensions scheduled for 11 units. The IAEA said the nuclear share in Russia’s energy mix is 18.59%. 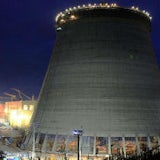