20 Apr (NucNet): Russia will start towing its first commercial floating nuclear power station, the Akademik Lomonosov, to the port city of Murmansk in the far northwest of Russia in “approximately one week”, the director-general of Russian state nuclear corporation Rosatom said on 19 April 2018.

Aleksey Likachev told an event in Paris to mark the 60th anniversary of the OECD Nuclear Energy Agency (NEA) that the plant would be moved with no nuclear fuel on board.

Fuel will be loaded in Murmansk and the plant will then be moved for deployment at Pevek, an Arctic port town in the country’s far north-eastern region of Chukotka, in June 2019. Commissioning is scheduled for the autumn of 2019.

The Akademik Lomonosov will be the first vessel of a proposed fleet of floating plants with small pressurised water reactor units that can provide energy, heat and desalinated water to remote and arid areas of the country. It will be the first floating nuclear station to be built and deployed since the MH-1A, also known as the Sturgis, in the US in 1967. The Sturgis was towed to the Panama Canal Zone that it supplied with 10 MW of electricity from October 1968 to 1975.

The 21,000-tonne vessel will have two Russian-designed KLT-40S reactor units with an electrical power generating capacity of 35 MW each, sufficient for a city with a population of around 200,000 people.

State nuclear corporation Rosatom said the Akademik Lomonosov will replace capacity lost when the Bilibino nuclear station in Chukotka is shut down. According to Rosatom, Bilibino generates 80% of electricity in the isolated region. 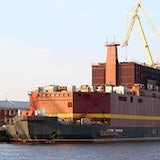