The facility is scheduled to begin commercial operation by the end of the year
Russia’ first floating nuclear power station, the Akademik Lomonosov, has successfully docked at its base in Pevek, an Arctic port town in the country’s far northeastern autonomous district of Chukotka.

Russia’s state nuclear corporation Rosatom said the station, accompanied by an icebreaker and two tugboats, arrived at a specially constructed wharf at Pevek after an 18-day, 9,000 km journey from its original base in Murmansk, where fuel was loaded into the reactors.

The 21,000-tonne vessel has two Russian-designed KLT-40S reactor units with an electrical power generating capacity of 35 MW each, sufficient for a city with a population of around 200,000 people.

The Akademik Lomonosov is scheduled to begin commercial operation at Pevek by the end of 2019.

It will be first in a proposed fleet of floating plants with small pressurised water reactor units that can provide energy, heat and desalinated water to remote and arid areas of Russia.

Russian state nuclear operator Rosenergoatom said the facility will be used to replace capacity lost when the Bilibino nuclear station is permanently shut down at the beginning of the next decade.

Bilibino – the smallest and the northernmost operating nuclear power station in the world – has three commercial EGP-6 graphite-moderated, water-cooled reactor units of 11 MW (net) each. They came online in 1975, 1976 and 1977. An identical unit, Bilibino-1, was permanently shut down in January 2019

It is also planned to use the Akademik Lomonosov to power the Chaun-Bilibin mining complex in Chukotka, which includes gold mines, and to supply electricity to offshore oil rigs in Russia's Arctic.

In June Russian nuclear regulator Rostekhnadzor issued a 10-year licence to Rosenergoatom to operate the Akademik Lomonosov until 2029. 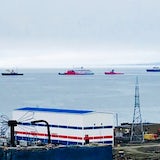 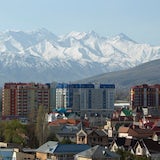