Tepco Gets Go-Ahead For ‘Ice Wall’ At Fukushima-Daiichi

26 May (NucNet): Japan’s nuclear regulator today approved a plan to install an impervious underground “ice wall” in the grounds of the crippled Fukushima-Daiichi nuclear station to try to slow the build-up of radioactive water, the Japan Atomic Industrial Forum (Jaif) said.

The wall will be built by drilling holes and inserting freezer pipes designed to freeze soil and prevent the flow of groundwater through the soil. Tepco will circulate a special refrigerant through pipes in the soil to create the 1.5-kilometre (0.9-mile) frozen wall that will stem the inflow of groundwater.

Jaif said Tepco had already begun testing the technology for the wall, which is intended to block groundwater from nearby hillsides that has been flowing under the station and mixing with polluted water used to cool reactors that went into meltdown after an earthquake and tsunami in March 2011.

In another effort to deal with contaminated water onsite, Tepco last week began discharging into the Pacific Ocean around 560 tonnes of groundwater collected at Fukushima-Daiichi after the water passed stringent safety tests.

According to the NRA, the so-called “groundwater bypass system” means diverting the flow of naturally occurring groundwater between the hilltop behind Fukushima-Daiichi and the reactor buildings, which are close to the ocean.

The groundwater bypass, one of several strategies being used to reduce the accumulation of contaminated water at the plant, aims to intercept clean groundwater as it flows downhill toward the ocean, and reroute it safely around the facility. The water is temporarily stored to verify its quality before it is released into the ocean.

The bypass is expected to reduce the amount of groundwater flowing into the reactor building basements by a maximum of 100 tonnes a day, the NRA said in a letter to the International Atomic Energy Agency posted online.

Tepco said the bypass will help reduce the volume of water that becomes contaminated and then needs to be cleaned and stored on site. This, in turn, is expected to reduce the burden on storage facilities by slowing the pace of contaminated water accumulation. 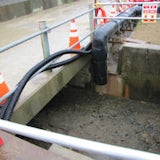