CNP1000 plant is likely to begin commercial operation this year
The Tianwan-6 nuclear power plant in Jiangsu province, eastern China, was connected to the grid for the first time on 11 May, according to the China Nuclear Energy Association.

According to the CNEA, grid connection took place at 20:27 local time, marking the start of the grid-connected commissioning phase for the 1,000-MW plant.

Tianwan-6 is a domestically developed CNP1000 design. It is seen as a Generation II+ design and a precursor to Generation III designs.

Construction of the plant began in September 2016 and fuel loading took place in April. Commercial operation is scheduled for this year, which would make it the country’s 51st commercial nuclear reactor in operation. Nuclear provides about 5% of the country’s electricity generation.

In Beijing’s latest five-year plan – which set out China’s economic and development goals for the five years from 2021 – the government said it aims to have 70 GW of installed nuclear capacity by 2025 from about 50 GW at the end of 2019. That would equate to about 20 new reactors, 2021-2025, although China already has 14 under construction. 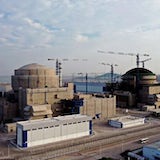 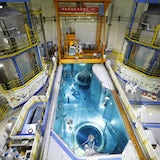 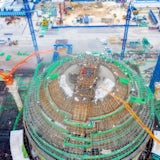