3 Dec (NucNet): An incident that caused the Zaporozhye-3 nuclear reactor in Ukraine to shut down automatically was the result of an electrical control component failure and did not result in any release of radioactivity, the State Nuclear Regulatory Inspectorate of Ukraine said.

The incident has been provisionally rated by the Inspectorate as Level 0 on the International Atomic Energy Agency’s International Nuclear and Radiological Events Scale (INES). This means it was a “deviation of no safety significance”.

The regulator said that when the electrical control component failed, the power supply to circuits in the main generator control failed and an emergency diesel generator started automatically. Following a throttle problem with the generator the reactor “scrammed”. A scram is a quick, automatic shutdown that is part of any reactor’s safety system.

There was no radiological release into the environment. The incident was under control within 11 minutes and there was no damage to any primary circuit component of the reactor.

The State Nuclear Regulatory Inspectorate said it has begun an investigation, which is standard procedure. 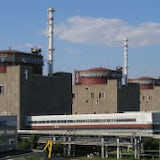