Mr al-Hammadi told a sustainable finance conference in Abu Dhabi that the third unit of the station’s planned four reactors, all supplied by South Korea, will start operations in late 2022.

Enec said in November 2021 that construction of Unit 3 had been completed and the 1,345 MW APR-1400 unit handed over for operational readiness activities.

In April 2021, Unit 1 became the first commercial reactor in the Arab world to begin full operation. Unit 2 was connected to the grid in September and is now undergoing testing while power levels are increased.

Mr al Hammadi said Barakah will contribute to the rapid decarbonisation of the power sector and supply 25% of the UAE’s electricity needs completely carbon-free. By 2025, it is projected that the Barakah plant will have cut Abu Dhabi Emirate’s carbon emissions by 50%.

The Barakah station is one of the largest nuclear energy facilities in the world. Construction began in 2012 and the project as a whole is now more than 96% complete. 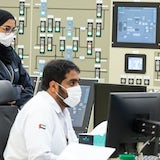 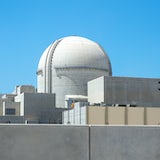 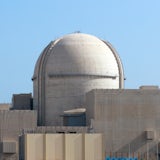