Reactor on target to begin operations in 2025
The $20bn International Thermonuclear Experimental Reactor project, which aims to build the world’s largest fusion reactor near Cadarache in southern France, passed a major milestone this week as construction crews lifted the first major piece of the reactor, known as a tokamak, into place.

Over two days, a crew of about 200 carefully lifted the cryostat base, a steel dish weighing 1,250 tonnes, into the tokamak pit.

The cryostat base – the single largest and heaviest tokamak component – is the bottom section of a huge metal can that will eventually contain the rest of the reactor, including the vacuum vessel, huge superconducting magnets, and cooling systems.

The Iter team is racing to have all of Iter’s major components on site by the end of 2021, in order to meet a December 2025 deadline for switching on the massive machine.

The cryostat base was manufactured by Larsen & Toubro at its Hazira factory in India.

The world’s first commercial-scale fusion reactor project is on track to officially launch operations at the end of 2025, said spokeswoman Sabina Griffith, but it will take at least a decade to fully power up the facility.

“The date for first plasma is set; we will push the button in December 2025,” Ms Griffith said. “It will take another 10 years until we reach full deuterium-tritium operations.” 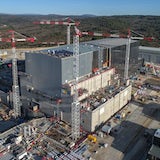 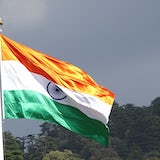