The base for the first reactor unit has been completed at Hinkley Point C in Somerset, England, meaning construction of the nuclear buildings above ground can now begin in earnest, EDF Energy said.

The base, reinforced with 5,000 tonnes of steel, has been under construction by the UK-French joint venture of Bouygues-Laing O’Rourke for six months. The final 9,000 cubic metres of concrete was the largest concrete pour in the UK, beating a record set by the Shard skyscraper in London, EDF Energy said.

First concrete was poured for the first part of the reactor base in December 2018.

The company said today that the objective is for “initial delivery for Unit 1 at the end of 2025”.

Final contracts have been signed for a joint venture to install the pipes and cables at the station. The joint venture comprises of UK contractors Balfour Beatty, Cavendish Nuclear, Altrad and Doosan Babcock. It was influenced by the success of a single organisation carrying out this complex work during construction at Taishan, the EPR operating in China.

EDF Energy said construction of the second of Hinkley Point C’s two units is well underway and is already showing the improved efficiency possible when an identical design is repeated. The 12-month separation in the schedule offers maximum efficiency for the transfer of teams between units.

EDF Energy chief executive officer Simone Rossi said the innovation at Hinkley Point C sets up the opportunity to reduce costs for the planned construction of a near identical power station at Sizewell C in Suffolk.

Almost 4,000 people are working at Hinkley Point C. Half of them are from the local area.

Forgings for the reactor pressure vessel and steam generators are underway at Framatome in France and the world’s largest turbine is under construction at GE.

The world’s largest crane – the Sarens SGC 250 – is taking shape on site to allow prefabrication of large parts of the nuclear buildings. About £1.5bn of contracts have been awarded in the South-West and 64% of the project value is being spent with UK companies. 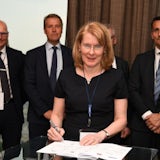 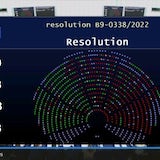 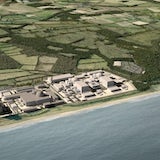