Country has ambitious nuclear plans, but they could be scaled back
Unit 3 of the Kakrapar nuclear power station in Gujarat state, western India, achieved first criticality on 22 July at 09.36 local time, the country’s Department of Atomic Energy confirmed.

Kakrapar-3 is a first-of-its-kind indigenous 630-MW (net) pressurised heavy water reactor unit designed by Indian scientists and engineers. The DEA said the plant’s components and equipment have been manufactured by Indian industries and construction undertaken by Indian contractors.

In a tweet, the prime minister said: “Congratulations to our nuclear scientists for achieving criticality of Kakrapar Atomic Power Plant-3! This indigenously designed 700 MWe KAPP-3 reactor is a shining example of ‘Make in India’. And a trailblazer for many such future achievements!”

Kakrapar-3 is one of two identical PHWRs under construction at the Kakrapar site. Construction of both Kakrapar-3 and Kakrapar-4 began in November 2010.

There are two older PHWRs in commercial operation at Kakrapar. Both units, Kakrapar-1 and -2 are 202-MW plants that began operation in the 1990s.

The Kakrapar-3 and -4 PHWR design is a scaled-up version of India’s 490 MW PHWR design, two of which have been in commercial operation at Tarapur-3 and -4 since 2005. Two more 630 MW PHWRs, identical to those at Kakrapar, are under construction at Rajasthan-7 and -8.

When Kakrapar-3 begins commercial operation, it will bring the number of reactors in India’s nuclear fleet to 23 with six under construction. According to the International Atomic Energy Agency nuclear provided about 3.2% of the country’s electricity generation in 2019.

Nuclear energy’s share of electricity in India is increasing, but at a much slower pace than coal and renewables, with plans for 63 GW of installed capacity by 2032 likely to be revised to something closer to 22.5 GW.

Even a target of 22.5 GW would represent a 235% increase on today’s 6.7 GW (gross) of available nuclear capacity. It would involve the construction of about 15 standard-size reactors of about 1,000 MW each.

The International Energy Agency confirmed in a recent report that India’s objective is to reach 63 GW of installed nuclear power capacity by 2032. 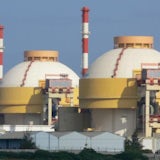 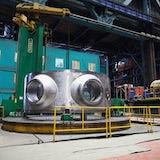 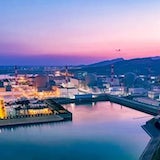