Moscow preparing to build three plants at the Baimskaya facility in Siberia
Russian state nuclear corporation Rosatom and GDK Baimskaya, a subsidiary of Kazakhstan’s Kaz Minerals Group, have signed a power supply agreement for a mining project that includes the planned use of floating nuclear power plants.

The long-term agreement is for the sale of electricity between Rosatom and the Baimskaya minerals deposit in Chukotka, in the country’s far east. A Rosatom spokesman said the agreement is “the most important event in the framework of a large-scale programme for the development of the Russian Arctic”.

Rosatom said it plans to use three floating nuclear power plants, each employing a pair of the new 55-MW RITM-200M reactors, a version of which is in service powering Russia’s icebreakers. A fourth unit would be held in reserve for use during repair or refuelling.

According to Rosatom, the first reactors are already under construction by Atomenergomash.

Russia’s media reported in May that president Vladimir Putin had approved a Rosatom proposal to power the mining venture by building as many as five floating nuclear power plants.

Kaz acquired the Baimskaya project for $900m in cash and shares in January 2019. It is one of the world’s most significant undeveloped copper assets with the potential to become a large scale, low cost, open pit copper mine.

Kaz said the project is in a region identified by the Russian government as strategically important for economic development and is expected to benefit from the construction of “some state-funded power and transport infrastructure and the provision of tax incentives”.

Copper concentrate will be shipped to customers from the port of Pevek, 700 km to the north of the Baimskaya project. Pevek is where Russia’s first commercial floating nuclear plant, the Akademik Lomonosov, is docked and supplying energy for the remote port town.

The 21,000-tonne vessel has two KLT-40S reactor units with an electrical power generating capacity of 35 MW each, sufficient for a city with a population of around 200,000 people.

In September 2019 the Akademik Lomonosov arrived at a specially constructed wharf at Pevek after an 18-day, 9,000 km journey from its original base in Murmansk, where fuel was loaded into the reactors. 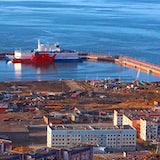 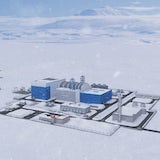